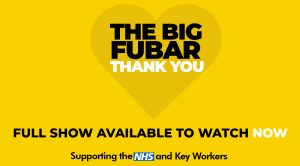 Commemorating two months of Lockdown, The Big FUBAR Thank You features 4 hours of amazing content in aid of the NHS and front line workers. Live music performances, contributions from social stars and incredible personal testimonies from front line workers combine to make this a blockbuster show.

We approached music artists, stars of social media and front line workers to be a part of a one hour special, but were so overwhelmed by the incredible response, that we ended up creating a four hour show!

Throughout the show, listeners were encouraged to donate to the NHS via the JustGiving page, which you can still do now.

Excitingly, the show is now available to watch in four parts on our YouTube channel or you can watch them below!