It is deeply saddening that the first thing people will remember when they say ‘Graham Taylor’ will be his ill-fated spell in charge of England, rather than being football’s perennial ‘nice guy’ and his outstanding club achievements with Watford and Aston Villa.

1994 was the year he appeared in the fly-on-the-wall documentary ‘An Impossible Job’, which documented England’s failure to qualify for the USA World Cup. 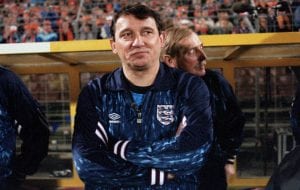 In a new world of injunctions, super-injunctions, media banning orders and social media restrictions, it highlights the remarkable bravery shown by Taylor to place himself so publicly on the chopping-block.

This was, without doubt, the toughest stage of Taylor’s career. Days were dark and he began to question his training methods, player relationships and ultimately himself as a human being. This is evidently one of the reasons his previous work has been so criminally underrated in the conversation of best top-flight English managers.

‘An Impossible Job’ had many memorable moments, including this infamous exchange with a linesman:

Born in Worksop in Nottinghamshire, Taylor was the son of a journalist and rose to prominence in the game as a manager after retiring as a player with Lincoln City in 1972. He became manager and coach at the club, winning the Fourth Division title with them before moving to Watford in 1977.

It was here, he formed a dynamic partnership with then owner, Elton John. Arguably this was where he produced his finest work taking a club languishing in the Fourth Division to the top flight in just five awe-inspiring years.

Spells at Villa, Wolves and back at Watford always bore the fruit of his labour. It was once more the perfect fit, winning the third-tier title in 1998 before dragging Watford back into the Premier League at the end of the following season after a play-off final victory over Bolton.

Despite an early encouraging win at Liverpool, Watford were relegated and the following season Taylor decided to retire – only to change his mind and make a comeback at Villa in February 2002. He retired for a second and final time after they struggled the following season with the scars of his England reign ultimately taking their toll.

Tributes from figures across the globe flooded in for a man whose genial personality and stunning man-management undoubtedly won him the hearts of a nation and the hearts of the entire sporting world.

Sir Elton John led the tributes, “I am deeply saddened and shocked to hear about Graham’s passing,” said the former owner of Watford.

“He was like a brother to me. We went on an incredible journey together. He took my beloved Watford from the depths of the lower leagues to uncharted territory and into Europe.

“We have become a leading English club because of his managerial wisdom and genius. This is a sad and dark day for Watford. The club and the town. We will cherish Graham and drown our sorrows in the many brilliant memories he gave us. I love you Graham. I will miss you very much.”

Sir Alex Ferguson also praised the man he called “approachable, open and honest”. The former Manchester United manager said: “Graham was one of the old-school managers. He started as a very young man of 28, having suffered a career‑ending injury as a player. He applied himself to every facet of football management. I have very fond memories of Graham. He was approachable, open and honest. If he could help you in any way, he always would. I was really shocked by this terrible news and I send my condolences to Graham’s wife and all of his family.”