Yesterday morning an image surfaced online of David Walliams and Alan Carr taking a romantic, clothe-less paddle on the water, leaving very little to the imagination. The picture isn’t quite as candid as it seems though but may look familiar to you.

Somewhere amongst all the shit in 2016 one of our highlights was the blossoming of Katy Perry and Orlando Bloom’s relationship certified by this fantastic image. 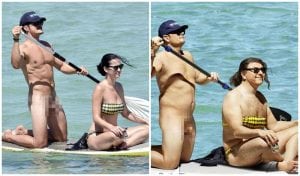 Walliams and Carr’s uncanny take on this classic 2016 moment got us thinking of all the best celebrity parodies of celebrities themselves, so here you go…

If anyone makes a better Beyoncé than B herself then it’s James Corden. He performed this Beyoncé parody of her visual album Lemonade, imitating scenes from Beyoncé’s release earlier this year as ‘Lemonjames: A Visual Monologue’.

Of course, after “breaking the internet” and being part of the most talked about power couple in entertainment what else was left for Kim Kardashian to do but to go as herself for Halloween in 2015? As she was pregnant for a second time, Kim decided to wear her infamous floral-curtain inspired dress she debuted at the 2013 Met Gala. Most people would probably see it as having the ability to mock herself but seeing as it is the woman who released a book of selfies to the world we are going to just have to put this down as perhaps the most narcissistic moment ever.

Late night superstar James Corden hits our list a second time, giving us this beauty of a picture back in 2008 for a shoot with Heat Magazine parodying David Beckham’s Golden Balls…

This underwear parody then flourished into the two Brits collaborating on Corden’s hit US talk show The Late Late Show with James Corden creating an advert for their faux underwear line ‘D&J Briefs’.

So everyone’s in agreement that no one wants to see anymore shitty celebrities mouthing shitty songs whilst doing shitty dancing in front of shitty hosts? But whilst Lip Sync Battle burnt out quicker than a match, it did provide us with a few gems such as this amazing one.

Channing Tatum and Step-Up co-star and wife, Jenna Dewan Tatum were the first celeb couple to hit the stage and battle it out on the US Lip Sync Battle. And although her husband’s efforts were admirable, she absolutely killed it with her imitation of his dance in Magic Mike, drill included and everything.

There’s not really a lot to say here for the couple who topped our chart but to just admire the work that went in to creating the most unexpected homage and parody from celebrities to Kanye West and his ‘Bound 2’ music video featuring wifey Kim K.